History of the Quarter Horse Breed

The Quarter horse type body traces its roots back to the 1600’s. In America at this time most horses were of Spanish origin, with the greatest amounts of blood from Arabian Barbs and Turkish bloodlines.

When the new English horses were bred to the native stock, a compact horse with heavily muscled hindquarters began to develop. These horses were used for the various farm chores like plowing, pulling logs, pulling carriages, and riding. The horses were bred to be able to do any and all jobs the farmer needed, which is where the breed’s great versatility started.

After doing chores all day the farmers would take their horses into town for very competitive quarter mile races. The fastest would win, and consequently be bred more often, creating a versatile horse that could now sprint extremely fast over short distances.

As people moved west they brought their horses with them. The horses not pulling wagons were used to drive the cattle and other livestock on the long trek.

People started noticing how well these horses could work with the cows making another name for it as a cowboy’s best friend thus ensuring its survival as a breed even after the motorization of farm equipment and modes of transportation drastically reduced the need for horses.

Due to its short, and stocky quick turning build the Quarter horse can outperform other breeds in many different sports including, calf roping, barrel  racing, team penning and reining, proving to the world that it is still as versatile as it once was.

The Quarter Horse was not recognized as an official breed until 1940 when a small group of the larger ranches in Texas got together to discuss keeping a record of the bloodlines of their bulldog type horses.

Unfortunately for the common folk only a few large ranches were allowed to register with the new registry. Many were turned away due to leaner Thoroughbred breeding which was popular during that time period in an effort to add more stamina to the popular quarter race horses. 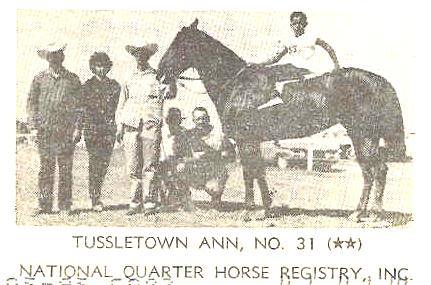 Several other registries were formed to accommodate the various other quarter type lines but all have since been absorbed by this original registry or the National Quarter Horse Registry.

The N.Q.H.R. is one of two registries started during that early beginning that has not been absorbed by another larger registry or Association.

The National Quarter Horse Registry has itself over the years absorbed several smaller registries which you can read about on our registry history page.

N.Q.H.R. has been registering horses for 50+ years; our founding stock closely following that of the other quarter registries with one difference. We are the only quarter horse registry that has always recognized quarter horses of all markings and colors.